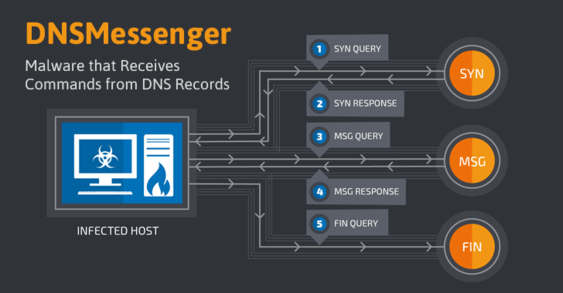 The Trojan came to the attention of Cisco’s Talos threat research group by a security researcher named Simpo.

Analysis of the malware led Talos researchers to discover a sophisticated attack comprising a malicious Word document and a PowerShell backdoor. The backdoor was found to be communicating with its command-and-control servers sending covert information via DNS requests.

Distributed through an email phishing campaign, the DNSMessenger attack is completely Fileless, as it does not involve writing files to the targeted system; instead, it uses DNS TXT messaging capabilities to fetch malicious PowerShell commands stored remotely as DNS TXT records.

This feature makes it invisible to standard anti-malware defenses.

PowerShell is a powerful scripting language built into Windows that allows for the automation of system administration tasks.

The malicious Word document has been crafted “to appear as if it were associated with a secure e-mail service that is secured by McAfee,” according to a blog post published by Talos researchers Edmund Brumaghin and Colin Grady on Thursday.

If the victim has local administrative access, it allows the malware to stay persistent on the system even after a reboot.

The DNSMessenger malware uses DNS TXT records that, by definition, allows a DNS server to attach unformatted text to a response. In this regard data from users machines can be covertly transferred to the hackers command and control centers. This script queries the command-and-control servers via DNS TXT message requests to ask what commands to execute. Any command received is then executed, and the output is communicated back to the C&C server, allowing the attacker to execute any Windows or application commands on the infected system.

“This malware sample is an excellent example of the length attackers are willing to go to stay undetected while operating within the environments that they are targeting,” the Talos researchers said.

“It also illustrates the importance that in addition to inspecting and filtering network protocols such as HTTP/HTTPS, SMTP/POP3, etc. DNS traffic within corporate networks should also be considered a channel that an attacker can use to implement a fully functional, bidirectional C2 infrastructure.”

This is not the first time when the researchers came across a Fileless malware. As we reported last month, Kaspersky researchers also discovered fileless malware, that resides solely in the memory of the compromised computers, targeting banks, telecommunication companies, and government organizations in 40 countries.

What Next Generation Security Do I Need?

The once popular commonplace IT security solutions are quickly becoming defunct as the cyber criminals exploit weaknesses which they no longer monitor for or protect you against.

Next generation security solutions are slowly becoming more commonplace as users and businesses become more educated on what is quickly becoming the new standard in IT Security.

Below we have listed some are a list of some of the most important next generation security layers you can put in place to help protect your business.

Remember security is a layered approach. It’s best to think of IT Security like the layers of an onion. Every layer adds another line of defense to protecting what matters most to your business “your data”.

Need help with putting in place some or all of the above. Contact us today for more information on our comprehensive Next Generation IT security and Cyber Security services.

Tech Guard – “We do the research so you don’t have to.”